The King Who Ran 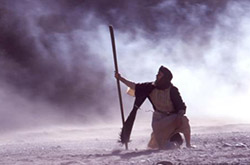 It is reported that there was once a king who, at a certain moment during his rule, came to the realisation that no matter how rich he was, his pleasures were of the fleeting kind and his end was going to be death.

These thoughts lingered in his mind, until one day he secretly left his castle and made his way towards the seaside. There, he spent his days earning his keep by working with bricks, and his nights worshipping Allah. Although he had traveled far away from his homeland, he could not remain unrecognised for long, and soon news of his story reached the king of the land that he was in. That king summoned him, but he refused to go; and when he was summoned for a second time, he made it clear that he didn't want to meet the king.

The king of the land was too curious about the former king's story to let the matter rest there. And so he went to him in person, but when the former king saw him approaching, he began to run away.

The king of the land chased him as he called out, "O slave of Allah, fear not," but the former king continued to flee from him.

He (former king) said, "I found that my heart desired separation from the children of Adam."

The king of the land asked, "How can you bear living a life of loneliness?"

He (former king) said, "Whoever finds comfort with Allah finds unwholesome the company of anyone else."

The king of the land asked, "And why did you leave your realm?"

He (former king) answered, "I thought about my outcome, my final destination on this earth, and I realised that my end here was near at hand. And so I decided to turn away from that which is temporary and to instead turn towards that which will abide forever. Turning to my Lord, I then fled from my sins."

The king of the land said "You do not have more reason to fear Allah than I do."

The king of that land then abdicated his throne, after which he followed his new companion on the path of simplicity, repentance, and worship.

This story shows us how the realisation of death can change your life greatly. When we truly begin to understand that this life is short and temporary it will free us from the overwhelming troubles and headaches of the worldly life and allow us to focus on our final destination, Paradise or Hell-Fire. Allah says in the Qur'an: "Every soul will taste death. Then to Us will you be returned." [Surah al-Ankabut 29:57]
Modern Non-Fiction Fiction Allah Patience Wealth Money Historical Classic Death Life Children Sin Repentance Regret Strength Debt Pain Niqab Hijab Grave Afterlife