The Generosity of Ibn Mubaarak 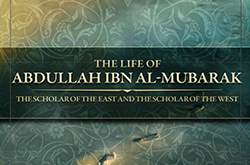 When the time for Hajj would come, ‘Abdullah ibn Mubaarak (may Allah have mercy on him) would gather his friends from Marw, and they would say to him, "We will accompany you." He would say to them, "Bring your expense money." He then would take expense money from them for the trip and place that money in a box, which he would then lock away.

‘Abdullah would leave Makkah and he would continue to spend on them until they returned home. Then the doors of their homes would be polished, and after three days passed, ‘Abdullah would hold for his friends a banquet for which he prepared special clothes for each one of them, after eating and enjoying themselves, ‘Abdullah would call for the box of money.

‘Abdullah would open it, and give to each man from them his bag of spending money, upon which was written his name, and each person would find that nothing was missing from what they originally put in those bags."

From this story we learn of the generosity of Abdullah ibn Mubaarak who was a major figure in the early Islamic period after the time of the Prophet Muhammad (May the Peace and Blessings of Allah be upon him) and his companions.
Modern Non-Fiction Fiction Allah Patience Wealth Money Historical Classic Death Life Children Sin Repentance Regret Strength Debt Pain Niqab Hijab Grave Afterlife