He Lost His Deen For A Woman 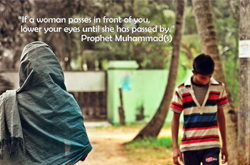 It is related that a group of people were once seated in the company of Al-Ḥasan Al-Baṣree (may Allah have mercy on him), when some men passed by, dragging along with them a body of a dead man. When Al-Ḥasan saw the dead man, a glint of instant recognition could be discerned in his eyes, and he fell unconscious from the shock of some memory that had just been rekindled.

When he regained consciousness, his companions asked him what was wrong with him. He said: "This man –referring to the dead man being dragged along on the ground– used to be one of the best worshippers and one of the most renowned ascetics (renouncing all the temporary pleasures of this world because he was so busy and devoted to worship)."

One day he left his home, intending to go to the Mosque to pray, but on the way, he saw a beautiful young Christian women, who became an immediate temptation to him. When he proposed to her, she refused, saying, "I will not marry you until you become an adherent of my religion."

He went on his way, but as time went on, he yearned for her continued to increase. He then succumbed to her wish and exited from the fold of Islam the religion of pure, unadulterated Monotheism.

After he became a Christian and some time passed, the woman came out to him from behind the curtain and said, "You are a man who is bereft of goodness. You have forsaken your religion, which was important to you for your entire life, simply for the sake of a lust that is of no value. Indeed, I too am forsaking my religion, but not for the same reason. I am doing so in order to achieve a blissful existence that never comes to an end, an eternal existence under the care of the One, the Self-Sufficient Master, Whom all creature need, He neither eats nor drinks)." She then recited the entire Surah Al-Ikhlaas: "Say : "He is Allah, (the) One. Allah-us-Samad (The Self-Sufficient Master, Whom all creatures need, He neither eats nor drinks). He begets not, nor was He begotten; And there is none co-equal or comparable unto Him." [Surah Al-Ikhlaas 112:1-4]

When the people had heard about what she had said, they approached her and asked, "All along, you had this Chapter memorized?"

She answered, "No, by Allah, I had never known it before. But after this man continued to insist upon having me, I saw a dream; I saw Hellfire, and my place in it was shown to me. I became terrified and panic stricken. Maalik – the custodian of the Hellfire – said to me: "Do not be afraid or sad, for Allah has ransomed you with this man." He then took me by the hand and admitted me into Paradise. Seeing a line written inside of it, I read it; among what was written were these Words: "Allah blots out what He wills and confirms (what He wills). And with Him is the Mother of the Book (Al-Lauḥ Al-Maḥfooz)." [Surah Ar-Ra‘d 13:39]

Al-Ḥasan then said: "The woman then embraced Islam, and the man whose corpse you just saw being dragged away was killed for having apostatised. And I ask Allah to make us firm and steadfast upon guidance and to grant us safety and success."

We can take multiple benefits from this story: 1) That the rights of Allah in Islam should always be put to the forefront of our lives. 2) No matter who you are or how religious you are, everyone is susceptible to temptation just as the man who was outwardly obedient and a devout worshipper was. 3) To take the commandment to lower our gaze seriously, if the man in the story had followed this commandment, then perhaps he would not have fell into the major sin which occurred not long after.
Modern Non-Fiction Fiction Allah Patience Wealth Money Historical Classic Death Life Children Sin Repentance Regret Strength Debt Pain Niqab Hijab Grave Afterlife