Meeting With The Shaytaan 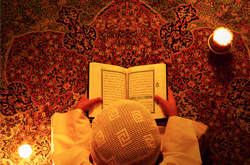 Once I was taking a midday nap in one of the inns of [the city of] Marw (Merv), then suddenly a frightening creature appeared to me, so I said: "Who are you?"

He (the creature) said: "You're not scared O father of Zakariyaa!"

So he (the creature) said: "I am Abu Murra (shaytaan).

So I said: Laa Ḥayyaakallaah (May Allah not give you life - i.e. may He not maintain your life upon good)."

So he said, "Had I known that you were in this house I would not have entered and I would have resided in another house. This has been my place of residence since I came to Khurasaan."

I said, "Where did you come from?"

He said, "He is propagating that the Qur’aan is created, and I came to Khurasaan and I will also leave a deputy in it."

I said, "What do you say about the Qur’aan?"

He said: "Even though I am an accursed devil, I say that the Qur’aan is the speech of Allah and it is not created."

From this story we can learn that the Qur'an was not a created thing, rather it is the speech of Allah, those who claim that the Qur'an is something created have fallen into a severe error, one which even the shaytaan hasn't fallen into.
Modern Non-Fiction Fiction Allah Patience Wealth Money Historical Classic Death Life Children Sin Repentance Regret Strength Debt Pain Niqab Hijab Grave Afterlife