Challenges From A Roman 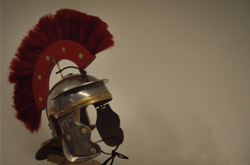 Many years ago, during the time of the Tabi’een (the generation of the righteous Muslims who had met the Companions but hadn't met the prophet -May the peace and blessing of Allah be upon him-), Baghdad was a great city of Islam. In fact, it was the capital of the Islamic Caliphate and because of the great number of scholars who lived there, it was the centre of Islamic knowledge.

One day, the ruler of Rome at the time sent an envoy to Baghdad with three challenges for the Muslims. When the messenger reached the city, he informed the khalifah that he had three questions which he challenged the Muslims to answer.

The khalifah gathered together all the scholars of the city and the Roman messenger climbed upon a high platform and said, "I have come with three questions. If you answer them, then I will leave with you a great amount of wealth which I have brought from the Emperor of Rome."

As for the questions, they were:
1."What was there before Allah?"
2."In which direction does Allah face?"
3."What is Allah engaged in at this moment?"

The great assembly of people were silent. In the midst of these brilliant scholars and students of Islam was a man looking on with his young son. "O my dear father! I will answer him and silence him!", said the youth. So the boy sought the permission of the khalifah to give the answers and he was given the permission to do so.

The Roman addressed the young Muslim and repeated his first question, "What was there before Allah?"

The boy asked, "Do you know how to count?"

"Then count down from ten!" So the Roman counted down, "ten, nine, eight,..." until he reached "one" and he stopped counting

The man said, "There is nothing before one, that is it!".

The boy replied, "Well then, if there obviously is nothing before the arithmetic 'one', then how do you expect that there should be anything before the 'One' who is Absolute Truth, All-Eternal, Everlasting the First, the Last, the Manifest, the Hidden?"

Now the man was surprised by this direct answer which he could not dispute. So he asked, "Then tell me, in which direction is Allah facing?"

The boy said, "Bring a candle and light it, and tell me in which direction the flame is facing."

The man said in wonderment, "But the flame is just light and it spreads in each of the four directions, north, south, east and west. It does not face one direction only."

The boy cried, "Then if this physical light spreads in all four directions such that you cannot tell me which way it faces, then what do you expect of the Light of the Heavens and the Earth! Light upon Light, Allah faces all directions at all times."

The Roman was amazed and astounded that here was a young child answering his challenges in such a way that he could not argue against the proofs. So, he desperately wanted to try his final question. But before doing so, the boy said, "Wait! You are the one who is asking the questions and I am the one who is giving the answer to these challenges. It is only fair that you should come down to where I am standing and that I should go up where you are right now, in order that the answers may be heard as clearly as the questions."

This seemed reasonable to the Roman, so he came down from where he was standing and the boy ascended the platform. Then the man repeated his final challenge, "Tell me, what is Allah doing at this moment?"

The boy proudly answered, "At this moment, when Allah found upon this high platform a liar and mocker of Islam, He caused him to descend and brought him low. And as for the one who believed in the Oneness of Allah, He raised him up and established the Truth. Every day He is upon an affair." [Surah Ar-Raḥman 55:29]

The Roman had nothing to say except to leave and return back to his country, defeated. Meanwhile, this young boy grew up to become one of the most famous scholars of Islam. Allah, the Exalted, blessed him with special wisdom and knowledge of the religion. His name was Abu Hanifah.

From this story we can take multiple benefits, one gives us a glimpse into the life of one of the four major Imaams of Islam known as Imaam Abu Hanifah and his skill when debating an Atheist, the other benefit is that the story gives us a some idea on how to deal with some common questions that Atheists pose to Muslims.
Modern Non-Fiction Fiction Allah Patience Wealth Money Historical Classic Death Life Children Sin Repentance Regret Strength Debt Pain Niqab Hijab Grave Afterlife