The Man Who Killed a Hundred 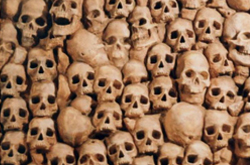 Abu Sa‘eed Al-Khudree (May Allah be pleased with him) reported: Prophet of Allah (may the peace and blessings of Allah be upon him) said: There was a man from among a nation before you (from the children of Israel) who killed ninety-nine people and then made an inquiry about the most learned person on the earth, and he was directed to a monk.

He came to him and told him that he had killed ninety-nine people and asked him if there was any chance for his repentance to be accepted? He said: "No", and the man killed him also completing one hundred.

He then asked about the most learned man in the earth. He was directed to a scholar. He told him that he had killed one hundred people and asked him if there was any chance for his repentance to be accepted? He said: "Yes," and asked: "Who stands between you and repentance? Go to such-and-such land; there [you will find] people devoted to prayer and worship of Allah, join them in worship, and do not come back to your land because it is an evil place."

Then there appeared another angel in the form of a human being and the contending angels agreed to make him an arbiter between them. He said: "Measure the distance between the two lands. He will be considered belonging to the land to which he is nearer."

They measured and found him closer to the land (land of the pious people) where he intended to go, and so the angels of mercy collected his soul.

N.B. In another version of the Ḥadeeth: "...He was found to be nearer to the locality of the pious by a cubit and was thus included among them."

Yet another version says: Allah commanded (the land which he wanted to leave) to move away and commanded the other land (his destination) to draw nearer and then He said: "Now measure the distance between them."