You Have Guided Me To A Path You Know Not Yourselves 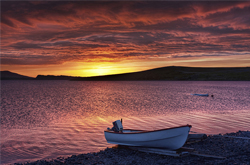 The following story is narrated by ‘Abdul-Waaḥid ibn Zaid: "We were on a sea vessel once, when the wind suddenly became stormy, and we were forced to leave the high seas and seek refuge on an island. We were surprised to see that we were not alone on the island; there standing before us was a man who was busy worshipping. We said to him 'What are you worshipping?' And he pointed to an idol,

We said, 'We don't have a person on our ship that does as you are doing'

The man asked, 'Then who is it that you worship?'

We said, 'We worship Allah.'

We said, 'He Whose Throne is in the Heavens and Whose dominion is in the heavens, the earth, and all that exists.'

'And how did you come to know that?' asked the man.

'He sent a messenger to us with clear proofs and miracles, and it was that messenger who informed us about Him.'

'And what has happened to your messenger?'

'When he finished conveying the message, Allah caused him to die,' we answered.

'Has he left you no sign?' the man asked.

'Show it to me,' requested the man.

When we showed him a copy of the Qur'an, he said, 'I cannot read it,' and so we read a part of it for him.

He then cried and said, 'The One Whose speech this is must not be disobeyed.' Not only did the man then accept Islam, he also diligently learned its teachings and then put what he learned into practice.

When the weather calmed down and we were ready to leave the island, he asked us if he could be a passenger on our ship. We of course agreed to have him join us, and it was a good thing that he came with us, for it gave us the opportunity to teach him a number of chapters of the Qur'an. At the end of the first evening of travel, all of us crewmen got ready to go to sleep. Our new passenger said, 'O people, the Lord that you guided me to, does He sleep?'

We said, '...He is the Ever Living, the One who sustains and protects all that exists. Neither slumber nor sleep overtake Him...' [Surah Al-Baqarah 2:255]

He looked at us and said, 'It is indeed bad manners for a slave to sleep in the presence of his master.' With a great deal of energy and vigor, he then jumped up and began to pray; and his crying voice could be heard until the morning.

When we reached a place called '‘Abaadaan [a place situated in present-day Iran], I said to my companions, 'This man is a stranger here, moreover, he is a new Muslim. We would do well to gather some money for him in order to help him out.' We gathered what we could, but when we tried to give him the money, he exclaimed, 'What is this!'

We said, 'Money that you can spend on yourself.'

He said, 'Subhan Allah (How perfect Allah is)! You have guided me to a way that you do not know yourselves. When I was living on a barren desert in the middle of the ocean, I worshipped other than Him, yet He did not allow me to go without; then how is it possible that He will make me be needy, when it is Him alone that I now worship? Indeed He is the Creator and the Provider.' He then left us and went on his way.

A number of days passed before we heard any news of his whereabouts. We were told he was in such and such place and that he was extremely sick. When we reached him, we saw that he was on the verge of dying. After extending greetings of peace to him, I said, 'Do you need anything?'

He said, 'The One Who brought you to the island when I did not know Him has provided me with all that I need,' he said.

I sat down beside him, thinking that I could stay for a while and comfort him. I soon fell asleep, and saw a dream. In the graveyard of ‘Abaadaan I saw the most beautiful girl that I have ever seen. She was saying, 'Hasten his burial, for it is a long time now that I have been yearning for him.'I woke up with a start and found that he had just died. I washed his body and enshrouded him. That night, after the burial had taken place, I saw another dream. In it, he was looking very handsome, and the same girl was sitting on the bed. Sitting beside her, he continued to repeat the verse:
"Peace be upon you for what you patiently endured. And excellent is the final home!" [Surah Al-Ra‘d 13:24]"

This story reminds us to try and perfect our reliance upon Allah alone as in accordance with the hadith of the Prophet Muhammad (May the Peace and Blessings of Allah be upon him)in which he said: "If you relied on Allah with a true reliance, He would provide for you the same as He provides birds: they set off in the early morning with empty stomachs and return back at the end of the day with full stomachs." [At-Tirmidhi, Ahmad]
Modern Non-Fiction Fiction Allah Patience Wealth Money Historical Classic Death Life Children Sin Repentance Regret Strength Debt Pain Niqab Hijab Grave Afterlife