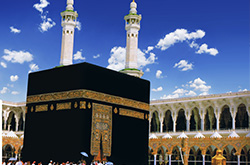 As ‘Abdullah was passing by a certain region, he noticed a bird that had fallen from the sky and died, so he ordered that it be thrown in a heap of garbage. Later on, when he passed by that very heap of garbage, he saw a young girl coming out of her home going to the pile of garbage and taking the dead bird, leaving with it and hurrying back to her home.

‘Abdullah went to her and asked her about what she did. The girl replied, "My brother and I live here and we own nothing except for our clothing. We have no sustenance except for what is thrown in that heap of garbage; for the past few days, even the dead carcass has become permissible for us. Our father used to have a lot of wealth, but he was wronged, his wealth was taken away from him and was killed."

‘Abdullah ordered for the supplies of the trip to be taken back to his home, and he said to his agent, "How much do we have in terms of spending money?" He said, "1000 dinars." 'Abdullah said, "Take from that 20 dinars which should be enough for our return journey, and give the rest to her, for that is better than our (voluntary) Hajj this year." He then returned home.