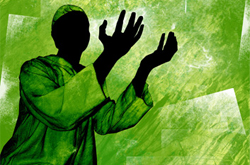 Abu Hurairah (may Allah be pleased with him) narrated that the messenger of Allah (may the peace and blessings of Allah be upon him) said:

Juraij worshipped in his hermitage and confined himself there. His mother came to him as he was busy in prayer and she said: "Juraij."

He said: "My Lord, my mother (is calling me while I am engaged in) my prayer." He continued with the prayer.

She returned and she came on the next day and he was busy in prayer, and she said: "Juraij, it's your mother."

And he said: "My Lord, my mother or my prayer," and he continued with the prayer and she went back, and then on the next day she again came and he was busy in prayer and she said: "Juraij, it's your mother."

The story of Juraij and that of his meditation and prayer became well known among the children of Israel. There was a prostitute who had been known for her beauty, and she said (to the people): "If you like I can seduce him for you."

She presented herself to him but he did not pay attention to her. So she went to a shepherd who lived near the hermitage and she offered herself up to him and he had a sexual intercourse with her and so she became pregnant and when she gave birth to a child she said: "This [child] is Juraij's."

So they came and asked him to get down and demolished the hermitage and began to beat him. He said: "What is the matter?"

They said: "You have committed fornication with this prostitute and she has given birth to a child from your loins."

He said: "Where is the child?" When they brought him (the child) he said: "leave me so that I would pray."

So he observed prayer and when he finished, he came to the child. He struck his stomach and said: "O boy, who is your father?"

The child said: "So-and-so the shepherd."

So they turned towards Juraij, kissing him and stroking him (seeking his forgiveness) and said: "We are prepared to construct your temple with gold."

He said: "No, just rebuild it with mud as it had been," and they did that."

One of the main things we learn from the story within this hadith is the importance and status of our mothers in Islam, as long as what they are asking for does not go against the commandments of Allah, we should give them the utmost attention and respect. It is mentioned in the sunnah that the Prophet (May the Peace and Blessings of Allah be upon him) used to shorten his prayer if he heard a child crying nearby. Now how about when someone who we're commanded to love the most calls us?
Modern Non-Fiction Fiction Allah Patience Wealth Money Historical Classic Death Life Children Sin Repentance Regret Strength Debt Pain Niqab Hijab Grave Afterlife