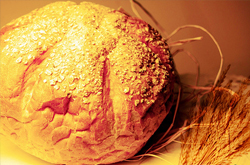 ‘Abdullah ibn Ja‘far, who was famous for his generosity, one day passed by a garden. He saw a slave gathering dates in it. He witnessed that the son of the owner of the garden came to the slave and gave him two loaves of bread, after which the slave sat down to eat. A dog approached the slave, and it was wagging its tail. The slave threw one of the two loaves of bread in the direction of the dog; the dog rushed towards the loaf of bread and ate it but continued to wag its tail. So the slave threw to the dog the second loaf of bread as well, after which he stood and continued his work!

‘Abdullah was amazed at what he saw from the slave that he approached him and asked, "O young man, how much nourishment is provided to you every day?" The slave answered, "The amount that you witnessed (meaning two loaves of bread)." ‘Abdullah said, "Then why did you give all of the food to the dog?" The slave replied, Indeed we do not live in a land that is inhabited by dogs, and I knew that the only thing that led this dog here was hunger. That is why I preferred it to myself." ‘Abdullah asked, "And what will you do for yourself today?" The slave said, "I will spend the night in hunger."

The owner of the slave said to ‘Abdullah, "Do you want to do all of that for him, just because of one deed? Indeed we see such wonderful deeds from him (the slave) every day! I bear witness the he is free for the sake of Allah and that the garden is a gift from me to him!"

From this story we learn about the good deeds of the people of the past and the generosity they would show each other, especially to righteous people.
Modern Non-Fiction Fiction Allah Patience Wealth Money Historical Classic Death Life Children Sin Repentance Regret Strength Debt Pain Niqab Hijab Grave Afterlife