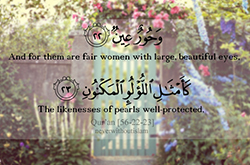 Khalid bin Safwan may (Allah have mercy on him) was in a mosque in Basrah where he saw a group of people. He asked "What is this gathering?" He was informed, "There is a women who informs men about women who are available for marriage."

Khalid went to her and said, "I want to marry a women."

The women said, "Describe her to me."

Khalid said, "I want her to be a virgin who is wise like a married woman, or a married woman who is innocent like a virgin; she should be sweet when she is near, splendid when she is at a distance, she should have lived a life of luxury and then became afflicted with poverty, so she has the manners of the rich and humility of the poor. When we gather wealth we should be as the people of the world, and when we become poor, we should be as the people of Hereafter."

The women replied to him (Khalid), "I know of such a women for you!"

Khalid asked, "And where is she?"

The woman said, "In paradise, so work to achieve her!"

From this story we learn of some of the desired characteristics that we should look for in a woman when searching for marriage, although we should also note that looking for a perfect woman with almost every single righteous characteristic, like how Khalid bin Safwan did, will probably lengthen the time that you're unmarried.
Modern Non-Fiction Fiction Allah Patience Wealth Money Historical Classic Death Life Children Sin Repentance Regret Strength Debt Pain Niqab Hijab Grave Afterlife