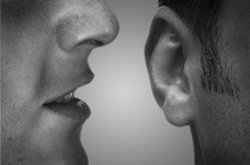 Wahb ibn Munabbih (may Allah have mercy on him) has related the following lengthy story from the people of the book (children of Israel).

There were three men from Banu Israel who were called to fight for the sake of Allah. They accepted the call, but they had concerns for their sister as she would be left behind with no-one to look after her. After some discussion, they agreed that the best place to leave her would be with the most trusted person in town.

This was a pious man called Burṣeeṣah, who lived in a sanctuary and devoted his entire life in the worship of Allah. They came to Burṣeeṣah and said to him, "O Burṣeeṣah. We know you to be a pious and trustworthy man. We have been enlisted to fight for the sake of Allah and we want to leave our sister with you. O Burṣeeṣah! We trust no one else in town except you. Please take care of our sister."

Burṣeeṣah immediately said, "I seek refuge in Allah! Get away from me! I have sworn to spend my time devoting it to the worship of Allah! I do not want to deal with these issues and be burdened with looking after someone"

The three men said to him, "O Burṣeeṣah! We have no where else to take her! We can’t leave her with anyone else and we don't trust anyone else. Please take care of our sister!"

Shaytaan heard the discussion, and came to Burṣeeṣah. "Burṣeeṣah..." The waswaas [evil whisperings] began. "Burṣeeṣah if you don't look after her, she might be left with someone who is not trustworthy! You have to take this responsibility"

Burṣeeṣah listened and finally agreed to look after her. He told the brothers to leave her in a separate house so not to distract him from his acts of worship. They left her there, said goodbye and went to jihad.

Burṣeeṣah would continue his acts of worship as normal, and during the day he would leave food on his doorstep so the woman would have to leave the house to collect the food. This also ensured they never saw one another and Burṣeeṣah never even left his place of worship.

"Burṣeeṣah...” he whispered, "You can't leave the food on your doorstep! As she is leaving the house someone might see her by herself. All alone and venerable and take advantage of her. Rather than her leave her house, you go to her house and drop off the food on her doorstep.

Burṣeeṣah made the decision that this was the right thing to do, and followed the bait that Shaytaan masked in a cover of righteousness. So during the day Burṣeeṣah would leave his worship, leave his place of worship, go to the house and leave the food on her doorstep.

This happened for a while and with the trap just being set, Shaytaan moved in for the next step.

"Burṣeeṣah..." the whispers came again. ”Burṣeeṣah...you are now leaving the food on her doorstep, but still this is not good. She still has to open the door and collect the food. Someone might still see her and she is so beautiful. She is VERY beautiful"

This servant of Allah, who never saw this woman started to be tempted by the whispers from Shaytaan about her beauty.

"Burṣeeṣah, her beauty is intoxicating and if someone sees her they may try something. You have to leave the food INSIDE her house. You don't have to look at her. Just knock on the door, and hand her the food as she opens the door."

Burṣeeṣah saw no harm in this. After all, it would stop people from seeing her. More deception covered in righteousness.
So again, Burṣeeṣah would leave his worship, leave his place of worship, go to the house and knock on her door to hand her the food.

"Burṣeeṣah...you can’t leave this poor woman all alone. Without any company. No one is speaking to her. She's lonely Burṣeeṣah. Just talk to her. There’s no harm in saying salaam and asking how she is. You can talk to her from behind the door...you don’t have to see her...just talk from outside."

He liked the idea and when he would bring her the food he would talk to her behind the door while she was in her room. They would talk for hours every day and the relationship began to get stronger.

Shaytaan found it easier and easier to drag him into the next step. "Burṣeeṣah, Burṣeeṣah!

Eventually...they commited zinaa [fornication] with each other.

"Oh what have I done" Burṣeeṣah said as he realised his mistake.

--From being a slave of Allah...to becoming a fornicator.--

But the story did not end there.

From that night, the woman became pregnant. Nine months later she delivered a baby boy.

The familiar whispers started again as Shaytaan flowed through Burṣeeṣah's veins like blood.

"Burṣeeṣah! when her brothers come back and find out their sister has a child from zinaa, you are going to be in trouble! There is only one way to solve this problem. Burṣeeṣah........you have to kill the baby! Get rid of the evidence!"

Grief and anxiety ran through Burṣeeṣah's mind as he listened to the whispers of Shaytaan. He did what he heard and killed the baby.

"Oh Burṣeeṣah! Do you think this woman will keep this a secret after you killed her own child?? No! Burṣeeṣah, the only thing to do now is to kill her!"

Burṣeeṣah then killed the woman and buried both mother and child under the house and covered it with a rock.

--From being a slave of Allah...to becoming a murderer.--

The three brothers returned and went to greet their sister. She was no where to be found. They went to the house of Burṣeeṣah and asked him, "Where is our sister?"

"She has passed away" he said as he pointed to a fake grave. The brothers were saddened by the loss, and made du'a for her.

That night when they went to sleep, Shaytaan came to them in their dreams and told them all what had happened.

As they all woke up in the morning, and talked about their dream, they began relating the same dream and thought there must be some truth in it.

They first dug up the grave Burṣeeṣah pointed to and found no body. They stormed to Burṣeeṣah's house and demanded to know what had happened to their sister. One of them saw the rock in the house and uncovered it, where they saw their sister and her child.

"What has happened to our sister?!" The eldest screamed. They forced Burṣeeṣah to disclose the secret of what happened and Burṣeeṣah told them everything.

Burṣeeṣah was taken to court where he confessed everything to the King. The King sentenced Burṣeeṣah to be executed. As they dragged him to his death, fear overcame Burṣeeṣah.

For the first time during this whole incident, Shaytaan appeared before Burṣeeṣah and said to him, "O Burseesah! Listen! Look at me! I was the one who was whispering to you since this whole thing started! I am Shaytaan!"

Burṣeeṣah's fear grew as the blade for his execution was brought!

"O Shaytaan! what should I do?!" Burṣeeṣah cried!

With an evil grin, Shaytaan said, "prostrate yourself to me. I am Shaytaan and I will save you! Bow down and prostrate to me!" Burṣeeṣah fell down in sujood to Shaytaan and as soon as he did this, Shaytaan ran away!
.....and Burṣeeṣah was executed.

From this story we learn the method and tricks that the devil will go through in order to get you to obey him. We have to remember that this individual, whom Allah has called an open enemy [2:168], has been around since the start of the Human race and he knows the different ways to bring a person away from Islam. The devil knew that his plans wouldn't have worked if he came to Burseesah and told him straight away to reject Allah, instead he started with small things like persuading Burseesah to not lower his gaze and so on, until eventually he led him down a long dark path which finally ended with disbelief. Another important point from this story is that no matter what status a person has, they are always susceptible to misguidance, even someone like Burseesah who spent all his time worshipping Allah. So we should fear for ourselves and ask Allah to give us protection and guidance.
Modern Non-Fiction Fiction Allah Patience Wealth Money Historical Classic Death Life Children Sin Repentance Regret Strength Debt Pain Niqab Hijab Grave Afterlife