Deceived By The Devil 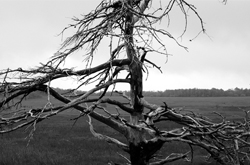 Al-Ḥasan Al-Baṣree narrated that once there was a tree that was worshipped instead of Allah. So, one man decided to chop down that tree. He was going to chop down the tree out of anger for the sake of Allah. On the way to the tree he met the Shaytaan who was in the form of a man. Shaytaan asked him, "What do you plan on doing?" The man answered, "I am going to chop down that tree that is worshipped instead of Allah." The Shaytaan said, "If you do not worship it, why should it harm you if others do so?" The man replied, "I will chop it down." The Shaytaan then told him, "Would you like something better than that? do not cut it and you will get two dinars every morning under your pillow." The man asked, "From where will I get that?" Shaytaan said, "I will give it to you."

Shaytaan asked him, "What do you want to do?" The man answered, "I am planning on cutting down that tree that is worshipped instead of Allah!" Shaytaan said, "You have lied. There is no way you will be able to do it." The man left to chop it down. The earth swallowed him until it almost killed him. Shaytaan asked, "Do you know who I am. I am the Shaytaan. I met you for the first time when you were angry for the sake of Allah and I had no power over you. I deceived you by two dinars and you stopped what you had intended to do [for the sake of Allah]. Now you have come because you are angry about the two dinars, and I have gotten mastery over you."