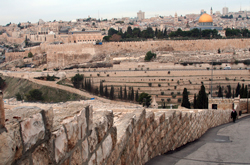 "Relate to them the story of the man to whom We sent Our signs, but he passed them by: so Satan followed him up, and he went astray." [Surah Al-A‘raaf 7:175].

During Bul‘aam's lifetime, Moses (peace be upon him) and the children of Israel fought the military campaign during the battle for Beit Al-Maqdis (Jerusalem) to conquer it and take it from the hands of the pagans, the likes of the Cananites and the Amalekites.

The Pagans came to Bul‘aam requesting that he supplicate to Allah against Moses (peace be upon him) and against the Muslims. They requested this from him because his supplication was accepted. At first he rejected their request. Then they convinced him, perhaps through giving him some wealth. At this point he supplicated against Moses (peace be upon him). As a result of this transgression, Allah the Exalted disgraced him and removed the blessing from him.

Despite the fact that he was a scholar, when he threw away the signs of Allah, Allah removed it from him. He threw away the signs of Allah and obeyed the pagans, and supplicated against the friends of Allah; therefor Allah the Exalted punished him. This is proof that whoever obeys the disbelievers and assists and aids them against the Muslims is similar to Bul‘aam; he is similar to Bul‘aam ibn Baa‘ooraa’, he has thrown away the signs of Allah. This story is also proof that Allah has a name which is greater than all the others, and that if He is asked by it He responds, the scholars have debated over what this name is, many say it is the name 'Allah' itself. *The dog always dangles its tongue out, whether it’s in the shade or the sun, if it is riding or walking; it dangles its tongue out. Thus Allah likens this man to a dog, the vilest of animals. And we Allah's refuge is sought.
Modern Non-Fiction Fiction Allah Patience Wealth Money Historical Classic Death Life Children Sin Repentance Regret Strength Debt Pain Niqab Hijab Grave Afterlife