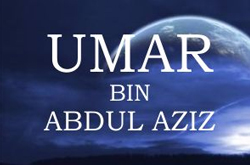 Fatimah the wife of Omar Ibn ‘Abdul Aziz said about his illness,
"That night, his shivering became uncontrollable and he couldn't sleep, so we kept a vigil over him and didn't sleep either.

In the morning, I told a servant of his known as Marthad, 'O Marthad, stay with the commander of the faithful] and if he has any single need then at least you are at hand.'"

We left and fell into a deep sleep due to the previous night spent awake. It was well into the day once we awoke and we went to see (Omar) and found Marthad sleeping outside the house. I woke him up and said, "What are you doing outside Marthad?"

Marthad replied, "He told me to get out! He said to me, 'Marthad, leave me! By Allah, I see something which is neither human or jinn!'"

When I came out, I heard him recite:
" As for that Abode of the Hereafter, We shall give to those who intend not high-handedness or mischief on earth: and the end is (best) for the righteous."
[Surah Al-Qasas 28:83]

Marthad said; "So I entered the room again and I saw his face turned and his eyes were closed. He had passed away"

In Islam, what counts is the way your life ends, if your life ends in a good way then insha'Allah it is a major sign towards your afterlife. Leaving your life end upon doing a good deed is a highly desired way for a Muslim to leave this world and 'Umar ibn Abdul Aziz was able to leave his upon the recitation of the Qur'an. The Prophet Muhammad [May the Peace and Blessings of Allah be upon him] said: “He who dies on something (i.e. doing it), Allah will resurrect him on the same state (he was in) before his death.” [Al-Hakim narrated it and he said: “It is authentic according to the conditions that Muslim put for the authentic ahadith,” and At-Thahabi agreed with him.”][Al-Mustadrak (1/340)]
Modern Non-Fiction Fiction Allah Patience Wealth Money Historical Classic Death Life Children Sin Repentance Regret Strength Debt Pain Niqab Hijab Grave Afterlife