Then How Will You Withstand The Fire Of The Hereafter? 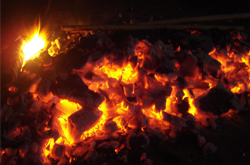 ‘Abdullah ibn Marzooq, who was a close friend of the ruler Al-Mahdee, was drunk one day and consequently missed the congregational prayer. His female servant came to him with a piece of burning wood and placed it on his leg. He jumped up with an expression of pain on his face.

Having understood the point of the painful lesson, ‘Abdullah ibn Marzooq repented. Thereafter, he performed his prayers on time and gave away a great deal in charity.

After some time passed, Al-Fudayl ibn ‘Iyaad and Ibn ‘Uyaynah visited him, and just by looking at him and the furniture of his home, they noticed a drastic change in his lifestyle. They asked, "No one forsakes something for Allah except that Allah compensates him with something equal or better, so what did Allah compensate you with for what you abandoned?" He said, "Contentment for the situation I find myself to be in."

This story reminds us of the hadith of the Prophet Muhammad (May the Peace and Blessings of Allah be upon him) in which he said: "Your (ordinary) fire is one of 70 parts of the (Hell) Fire." Someone asked, "O Allah's Apostle This (ordinary) fire would have been sufficient (to torture the unbelievers)," Allah's Apostle said, "The (Hell) Fire has 69 parts more than the ordinary (worldly) fire, each part is as hot as this (worldly) fire." [al-Tirmidhi Vol.4 Book 13, 2589]
Modern Non-Fiction Fiction Allah Patience Wealth Money Historical Classic Death Life Children Sin Repentance Regret Strength Debt Pain Niqab Hijab Grave Afterlife