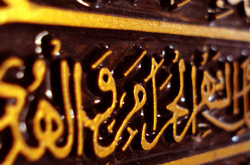 When ‘Omar Ibn ‘Abdul‘aziz became caliph, he wrote to Al-Ḥasan Al-Baṣree to write him the description of a just ruler, and Al-Ḥasan wrote him: "Know, commander of the faithful, that Allah has made the just ruler, the straightener of the crooked, the reformer of the corrupt, the strength for weak, the justice for the oppressed, the refuge of all who are pitied.

The just ruler, O commander of the faithful, is like a herdsman, concerned for the camels he tends, desiring the sweetest pasture for them, driving them away from dangerous grazing places, protecting them from beasts of prey, and shielding them from the harms of heat and cold. And the just ruler, commander of the faithful, is the guardian of the orphan, and the treasury for the poor, fostering the little ones, and providing for the old ones.

The just ruler, O commander of the faithful, is as the heart is to the members of the body: all are sound when it is sound, and all corrupt when it is corrupt.

Therefore, O commander of the faithful, act not in what Allah the All-Mighty and Glorious has given you like a slave whose master has trusted him and given into his care his wealth and his children, who then squanders his master's wealth and drives his children away, and reduces the family to poverty and scatters their fortune.

And know, O commander of the faithful, that Allah has sent down the prescribed punishments to drive [people] away from wickedness and immorality. How shall it be, if he who administers them, is the one who deserves them? And He sent down [the law of] retribution to give life to His servants. How will it be if the man who gives them retaliation puts them to death?

Remember death, O commander of the faithful, and what comes after it, and how few supporters you have there, or aids against it. Therefore make provision for death, and against the greater terror which follows it.

And know, commander of the faithful, that there is a place for you other than the place where you are now. Your stay there will be long, and your friends will be separated from you. You will be committed to its depths as a completely solitary individual. Therefore, make provision of what you may take with you - 'On the day when a man shall flee from his brother, his mother, his father, and his wife and his children.' [Surah ‘Abasa 80:34-36], and remember, commander of the faithful, 'When that which is within the tombs shall be cast out, and that which is in the hearts will be exposed' [Surah Al-‘Aadiyaat 100:9-10], when secrets are made manifest, and 'The record leaves nothing, great or small, without numbering it' [Surah Al-Kahf 18:49].

And now, commander of the faithful, you are in leisure, before the set time [death] comes and the severing of hope. Therefore commander of the faithful, do not give judgement among the servants of Allah according to the rulings of the ignorant, and do not lead them on the footsteps of the transgressors, and do not put the arrogant in power over the humble, for such will not pay regard to ties of relationship nor those of covenant in the case of a believer, so that you will have to acknowledge your own faults and the faults of others, and bear your own burdens and other burdens too. Do not be deceived by those who would lead a pleasant life by causing damage to you, and eat the good things of this world by causing the good things of your afterlife to disappear. And do not regard your power in this world, but look toward what will be your power when you are a captive in the bonds of death, and forced to stand before Allah the Most High in the presence of the angels, prophets and the messengers, and the faces [of creation] are turned to the Living and Self-subsisting One.

And, O commander of the faithful, though I have not attained by my rigours what prudent men has attained before me, yet, I have not desisted from offering you advice, sending you my letter as a doctor would request from a beloved friend to drink an unpleasant medicine, because he hopes to offer him health and soundness.

And peace be upon you, O commander of the faithful, and the mercy of Allah, and His blessings."

From this story we learn about the character of past Muslim rulers like 'Omar ibn Abdul Aziz, in that they would take their role seriously and realise that they have to rectify themselves first before dealing with the people. We learn that a true Muslim looks into their own faults first asks someone who is knowledgeable and known for their obedience to Allah for advice.
Modern Non-Fiction Fiction Allah Patience Wealth Money Historical Classic Death Life Children Sin Repentance Regret Strength Debt Pain Niqab Hijab Grave Afterlife