Two Honest Men and the Arbitrator 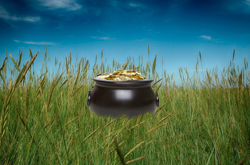 Abu Huraira (may Allah be pleased with him) reported that the messenger of Allah (may peace be upon him)said:

A person bought from another person a piece of land, and the person who had, bought that land found in it a pot which contained gold. The person who had bought the land said [to the seller of the land]: "Take your gold from me, for I bought only the land from you and not the gold!"

They then referred the matter to a person. One who was made as a judge, and he said to them: "Do you have children?"
One of them said: "I have a boy," and the other said: "I have a young daughter."

He(the arbitrator) said: "Marry this young boy to the girl, and spend on them from [this gold] and also give (some) charity out of it."

From this story we learn that Islam teaches justice for all people and this is exemplified in the actions of the two men who wanted to be just to each other concerning the pot of gold, they didn't want the others right to be taken away. Another point of benefit from the story is that when a situation like the one mentioned in the story occurs, it is wise and best to appoint a person of knowledge and wisdom as a judge.
Modern Non-Fiction Fiction Allah Patience Wealth Money Historical Classic Death Life Children Sin Repentance Regret Strength Debt Pain Niqab Hijab Grave Afterlife