Burned to Ashes out of Fear of Allah 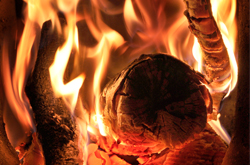 Abu Sa‘eed Al-Khudree narrated that the Prophet (may the peace and blessings of Allah be upon him) mentioned a man from the people of the past, and told his story saying:

Allah had given him wealth and children. When his death approached, he said to his sons: "What kind of father have I been to you?" They replied: "You have been a good father."
He told them that he had not presented any good deed before Allah, and if Allah should get hold of him He would punish him.

"So look!" he added, "When I die, burn me, and when I turn into coal, crush me, and when there comes a windy day, scatter my ashes in the wind."

The Prophet added, "Then by Allah, he took a firm promise from his children to do so, and they did so, and threw his ashes on a windy day.

Then Allah gave his command to his ashes, saying: "Be," and behold! He became a man standing! Allah said: "O My slave! What made you do what you did?" He replied: "For fear of You," and Nothing saved him then but Allah's Mercy (So Allah forgave him)."

This story is proof that we cannot enter paradise or be saved from the hell-fire purely on account of our deeds, we have to remember that ultimately it is from the mercy of Allah that we will be saved, this is in accordance with another Hadith of the Prophet Muhammad (May the Peace and Blessings of Allah be upon him): Jabir reported: I heard Allah's Apostle (sallallahu alayhi wasallam) as saying: None of you would get into Paradise because of his good deeds alone, and he would not be rescued from Fire, not even I, but because of the Mercy of Allah. (Muslim Book 39, Number 6769).
Modern Non-Fiction Fiction Allah Patience Wealth Money Historical Classic Death Life Children Sin Repentance Regret Strength Debt Pain Niqab Hijab Grave Afterlife