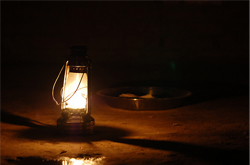 Both of them lived in a small town that was populated by only tens or hundreds of people. He was in love with her, and so when he saw her walking alone one night, he followed her until he had her cornered. When he came near to her, he said, "Woman, I crave for you."

She said, "First go and see if all the people are asleep."
Very pleased at her response, he walked around the town and returned. "Everyone is asleep,"He said.

She asked "What about Allah the Mighty and the Majestic! Is He sleeping at this hour as well?"

"Woman, what are you saying?" he exclaimed."Indeed, Allah does not sleep: neither slumber nor sleep overtake Him."

"The One Who hasn't slept and doesn't sleep sees us, even if people don't see us," she said."Do you not fear Him Who neither sleeps nor is heedless of anything that happens?"

The man left her alone with tears flowing from his eyes, having nothing in mind except the desire to repent to the One Who neither sleeps nor is heedless of anything that happens.

From this story we are told to remember Allah the Most High whenever you think of committing a sin, for indeed He is always watching you and He is never heedless of your actions.
Modern Non-Fiction Fiction Allah Patience Wealth Money Historical Classic Death Life Children Sin Repentance Regret Strength Debt Pain Niqab Hijab Grave Afterlife