The Bedouin and the Qur'an 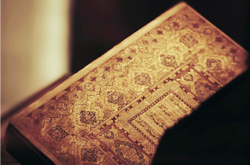 One year, when Al-Asma‘ee was on his way to perform hajj, a Bedouin carrying a large sword and a long spear confronted him. It was quite obvious that he was a highway robber. He came near Al-Asma‘ee and instead of fleeing or attempting to escape, Al-Asma‘ee drew nearer to him. He extended greetings of peace to the robber. The latter responded and then asked, "Where are you from?"

Al-Asma‘ee replied, "I am a poor man on a journey,"

The robber asked, "Do you have anything with you?"

Al-Asma‘ee answered, "Yes, I have the Qur'an with me."

The robber asked, "And what is the Qur'an?"

Al-Asma‘ee said, "It is the speech of Allah the Almighty, the Glorified,"

The robber asked, "And does Allah have speech?"

The robber said, "Then let me hear some of His speech,"

Al-Asma‘ee recited the following verse: "And in the heaven is your provision, and that which you are promised." [Surah Adh-Dhaariyaat 51:22]

When the robber heard these words, he began to cry, and threw down his sword and spear, and said, "Perish the highway robber, who seeks sustenance on the Earth, when it is really in the heavens!"

Al-Asma‘ee was very much pleased to see the quick transformation of the robber. On the following year, when Al-Asma‘ee went to perform Hajj again, he saw the former robber, whose face now had the signs of faith on it, clinging to the curtain of the Kaa‘ba. It was late in the night and he was saying, "O my Lord, the eyes are sleeping and every loved one is with his beloved. The gates of all kings are now closed, but Your gate is open to those who ask of You. Would that I knew whether You accepted this night of worship from me!"

This story shows us that anyone, no matter how evil they may seem, is not beyond being guided by Allah, so we should try and convey the message of the religion to everyone we meet, no matter what we think of them, just as the Prophet Moses was commanded by Allah to speak to Pharaoh gently in the following verse: "And speak to him with gentle speech that perhaps he may be reminded or fear [Allah]." - Qur'an: Surah Taha 20:44 We are not considered better than Prophet Moses and people we come across are unlikely to be worse than Pharaoh, so we should always adopt a gentle manner when dealing with others, like Al-Asma'ee did with the robber.
Modern Non-Fiction Fiction Allah Patience Wealth Money Historical Classic Death Life Children Sin Repentance Regret Strength Debt Pain Niqab Hijab Grave Afterlife