There Is Hope Until The Very End 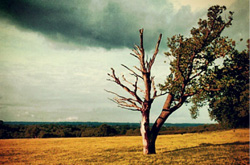 One day, as ‘Ali ibn Abu Ṭaalib and Al-Ḥussain ibn ‘Ali were walking together, they heard a man supplicating to Allah. The man was begging Allah to forgive him for his evil crimes. His sincere tone and eloquent words aroused the interest of ‘Ali, who turned to his son and said, "Do you not hear the man who is so very remorseful because of his sins? Go catch up with him and call him."

When Al-Ḥussain caught up with the man, he saw that he was clean looking, smelling good, with nice clothes and altogether handsome- except that he seemed to be paralysed on the right side of his body. Al-Ḥussain said, "Answer the summons of the Leader of the believers, ‘Ali ibn Abu Ṭaalib."

Dragging his right side, the man followed Al-Ḥussain back to where ‘Ali was waiting for them.

‘Ali Asked,"Who are you and what is your story?".

The man said, "My story is that of a man who did not fulfil the rights of others and is now being punished for that".

The man said, "I was famous among the Arabs for my frivolous and sinful exploits. Merciful and kind, my father would constantly admonish me and advise me to mend my ways. He would remind me of Allah's punishment, saying, 'My son, do not go against He who punishes with the Hell-fire!' When he would persist in advising me, I felt his voice grating on my nerves. I would get so frustrated that I would beat him with harsh blows. In response to my blows, he one day said, 'By Allah, I will fast without breaking my fast and I will pray without stopping to sleep.' He fasted for an entire week, but seeing no change in my behaviour, he climbed a camel and set off to perform Hajj. His parting words were, 'I am going to the House of Allah, and there I will seek help from Allah against you.' When he reached Makkah, he embraced the curtain of the Kaa'ba and supplicated against me, asking Allah to make me paralysed on one side of my body. By the One Who raised the sky and sends down the rain, no sooner did my father finish his supplication than I became paralysed on my right side, which became like a piece of wood. Anyone that would then pass by me would point to me and say, 'Allah answered his father's supplication against him.'"

‘Ali asked, "What did your father do then?".

The man replied, "O Leader of the Believers, after he became pleased with me, I asked him to go back and invoke Allah on my behalf. He agreed to do so. I walked alongside him as he rode on his camel, until we reached a place called the Valley of Arak. When we reached there, a group of birds flew away from a tree, their sudden movement frightened the camel. As the camel raced off in a state of fright, my father fell off it and died."

It was certainly late for the man, but not too late, and so ‘Ali advised him to continue to supplicate and to repent for his past misdeeds. ‘Ali then parted from the man, but before leaving him, he taught him the supplication that a person in distress should say. [The narration does not specifically mention which supplication it was that ‘Ali taught the man.]

This story teaches us that when we sin we can be trialled and punished in this life and that punishment is not exclusive to the next life. We also learn the severity of disobeying parents and that their supplications either for or against their children are accepted, as the Prophet Muhammad (May the Peace and Blessings of Allah be upon him) said: "The supplications of three persons are accepted and there is no doubt concerning their acceptance: a father; a traveller; one who is wronged." (Ahmad, Abu Dawood, Tirmidhi)
Modern Non-Fiction Fiction Allah Patience Wealth Money Historical Classic Death Life Children Sin Repentance Regret Strength Debt Pain Niqab Hijab Grave Afterlife