The Wisest and the Most Ignorant of People 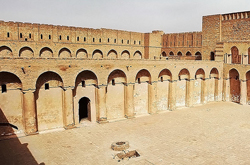 When Al-Manṣoor ibn ‘Ammaar, once entered the court of ‘Abdulmalik ibn Marwaan, the latter said, "O Manṣoor, I have a question for you, and I will give you respite for an entire year to answer it:

Who is the wisest of people, and who is the most ignorant of people?"

Al-Manṣoor left the castle and spent some time in contemplation in a nearby courtyard. Then the answer came to him, and so he quickly hurried back to ‘Abdulmalik.

‘Abdulmalik asked, "O Manṣoor, why have you returned?".

Al-Manṣoor said: "The wisest of the people, O Leader of the Faithful, is the doer of good deeds who fears not having his deeds accepted."

"And the most ignorant of people is he who does good deeds and feels safe in that his deeds will be accepted."

Upon hearing these words,‘Abdulmalik began to cry until his garment became soaked in tears. He then said:'You have done well, O Manṣoor. Now, recite a part of the Qur'an to me, for the Qur'an is a cure for what is in the hearts of men.'

Al-Manṣoor then recited this verse: "On the Day when every person will be confronted with all the good he has done, and all the evil he has done, he will wish that there were a great distance between him and his evil. And Allah warns you against Himself(His Punishment) and Allah is full of Kindness to the (His) slaves." [Surah Aal-‘Imraan 3:31]

‘Abdulmalik said:"You have killed me, O Manṣoor,".
"O Manṣoor, what does, 'And Allah warns you against Himself' mean?"

Al-Manṣoor said, "It means His Punishment".

‘Abdulmalik asked, "And what is the meaning of, 'every person will be confronted with all the good he has done?"

Al-Manṣoor replied, "It means that every person will be confronted on the Day of Resurrection by all of his deeds, the largest of them and the tiniest of them. Allah will not leave out or forget any of that."

‘Abdulmalik then continued to cry until, being overcome with fear, he fainted.

The best of people are those who if they were to be admonished, even by those who are in a lesser worldly position than them, they take heed to the admonition and accept it. Also, It is a good practice for the person to ask for reminders from people he/she deems more knowledgeable.
Modern Non-Fiction Fiction Allah Patience Wealth Money Historical Classic Death Life Children Sin Repentance Regret Strength Debt Pain Niqab Hijab Grave Afterlife