Imaam Bukhari and One Thousand Dinars 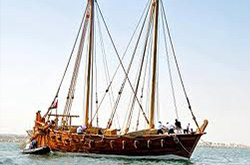 In Al-Fawaaid Ad-daraaree, Al-Ajloonee related that Imam Bukhaaree (may Allah have mercy on him) once travelled by boat on a journey to seek out knowledge and that he had taken with him one-thousand dinaar. One of his fellow travellers ingratiated himself with Imam Bukharee, outwardly showing him love and admiration. During the sea-voyage, the man often made it a point to sit in his company. On long journeys, friendships develop faster than normal, and during the course of the time they spent together, Imam Bukhaaree informed the man that he had one-thousand dinaar with him.

The morning after Imam Bukharee spoke about the money, the man woke up and began to cry, scream, rip his clothing apart, and slap his own face, as if he had just been afflicted with a great loss. His fellow shipmates asked him what was wrong, and he refused to answer at first, as if he was still in a state of shock and could not bring himself to speak about his situation. After they continually insisted that he tell them what the matter was with him, he finally said, “I had a bag that contained one-thousand dinars, and I lost it.”

The crewmen who were in charge of the ship began to search the passengers. One by one everyone was being searched, and upon realizing what was happening, Imam Bukharee, making sure that no one was looking, threw his bag of money over the side of the ship. When it was his turn to be searched, nothing was found. When the entire ship and all of its passengers were searched, and when no bag of money was found, those in authority on the ship went back to the man who had made up the story and chastised him for making a false claim and for putting them through so much trouble. As soon as the ship finally reached shore, the passengers began to disembark;meanwhile, Imam Bukhaaree’s old friend went to him and asked him what he had done with the bag of money.

“I threw it into the sea,” Imam Bukhaaree matter-of-factly replied.

“And you are patiently accepting the fact that you have just lost such a huge sum of money?” the man asked in bewilderment.

“O ignorant one,” Imam Bukhaaree said, “Do you not know that I have spent my entire life gathering the Ahadeeth of the Messenger (Sallalaahu alaihi wa Sallam) and that the world now acknowledges my trustworthiness. Would it then have been befitting for me to subject myself to the accusation of theft? And shall I lose the precious pearl (i.e my knowledge and achievements as a scholar) that I have earned over a lifetime over a limited number of dinars?”

This story teaches us the value of honour and how the Imaams of the past would act so that their honour would never be compromised, even when they had done no wrong. This was for a number of reasons, one of the main ones being that if their character came under scrutiny the work that they had done could also come under scrutiny, and as we know Imaam Bukhari's work was one of the most important in the history of Islam.
Modern Non-Fiction Fiction Allah Patience Wealth Money Historical Classic Death Life Children Sin Repentance Regret Strength Debt Pain Niqab Hijab Grave Afterlife