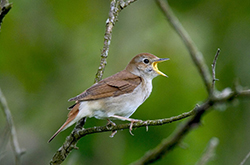 ‛Alī ibn ‛Abdul-‛Aziz said, Arim narrated to us saying I went to Abu Manṣur (may Allah have mercy on them all) to visit him, he said to me, "Sufyan resided in this house and there was here a nightingale belonging to my son. He (Sufyan) said, 'Why is this locked up (in a cage)? It should be freed.' I said, 'It belongs to my son and he gives it to you as a gift.' Sufyan said, 'No, I will give him a dinar for it.' He said, 'He (Sufyan) then took it and freed it and it would go out and return in the evening and would be at the far end of the house. When Sufyan died, it followed his funeral procession and was flying over his grave. After this on some nights it would go to his grave and sometimes would spend the night there, and sometimes would return back home. Then some people found it dead by his grave and it was buried alongside Sufyan."
Modern Non-Fiction Fiction Allah Patience Wealth Money Historical Classic Death Life Children Sin Repentance Regret Strength Debt Pain Niqab Hijab Grave Afterlife