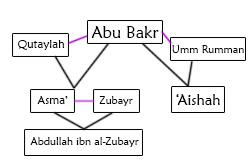 Ibn al-Ḥarith the nephew of ‛Aa'isha (may Allah be pleased with her) the mother of the believers narrated that she was told that ‛Abdullah ibn az-Zubayr (may Allah be pleased with him), on hearing that she was selling, or giving something as a gift said: "By Allah, if ‛Aa'isha does not give this up, I will make Hijrah (Migrate) from her (i.e., boycott her)." She asked, "Did he (‛Abdullah ibn az-Zubayr) say this?" They (the people) replied, "Yes." ‛Aa'isha then said, "I vow to Allah that I will never speak to Ibn az-Zubayr."

When this desertion was prolonged, ‛Abdullah sought intercession with the people concerning her, however she said: "By Allah, I will not accept the intercession of anyone on his behalf and will not commit a sin by breaking my vow." When this state of affairs was prolonged on Ibn az-Zubayr (i.e. he felt it hard on himself), he spoke to al-Miswar ibn Makhramah and ‛Abdur-Rahman ibn al-Aswad ibn 'Abd Yaghooth (may Allah have mercy on them both), who were from the tribe of Banee Zuhrah saying, "I beseech you by Allah, to (help) me to enter upon ‛Aa'isha, for it is unlawful for her to vow to cut off relations with me(since he was her nephew and she was mainly responsible for his upbringing)." So al-Miswar and ‛Abdur-Rahman went with him (and set forth) wrapping their cloaks around themselves to ‛Aa'isha and asked her permission (to enter) saying, "‛Assalamu ‛alayki wa Rahmatullahi wa barakatuhu, may we come in?" ‛Aa'isha responded, "Come in." They asked, "All of us?" She replied, "Yes, come in all of you," unaware that Ibn az-Zubayr was also with them. So when they entered, Ibn az-Zubayr entered the place which screened (‛Aa'isha from the other men) and embraced ‛Aa'isha and started requesting her to excuse him and wept. Al-Miswar and Abdur-Rahmaan also started urging her to speak to him and to accept his apology. They said to her, 'You know what the Prophet (may the peace and blessings of Allah be upon him)forbade regarding deserting (not speaking to your Muslim brethren), for it is unlawful for any Muslim not to talk to his brother for more than three nights." So when they increased in reminding her (of the superiority of having good relations with kith and kin, and of excusing others' sins) and of the unhappy and unpleasant constrictions that are a consequence of breaking the ties of relationship, she started reminding them while she wept saying, "I have made a vow and (the issue of a) vow is a difficult one."

Al-Miswar and ‛Abdur-Rahman persisted in their appeal until she spoke to ‛Abdullah ibn az-Zubayr (may Allah be pleased with him) and she freed forty slaves as an expiation for her vow. Later on, whenever she remembered her vow, she would weep so profusely that her veil would become wet with her tears.

This story highlights the attitude the companions had to keeping the family ties strong and not cutting them off which is a major sin in Islam. The story also shows us how seriously vows were taken by Muslims in the past, something which isn't taken as seriously as it should be in modern times.
Modern Non-Fiction Fiction Allah Patience Wealth Money Historical Classic Death Life Children Sin Repentance Regret Strength Debt Pain Niqab Hijab Grave Afterlife